Ever wondered how Stephen Hawking saw the universe as a doctoral candidate, when his theories about black holes were just coming into fruition? You don’t have to hear about it second-hand — you can now go straight to the source. The legendary cosmologist has published his 1966 doctoral thesis online for anyone to read, making it available to the public for the first time. Hawking is posting his work in hopes that it’ll spark interests in both space itself and sharing research. “I hope to inspire people around the world to look up at the stars and not down at their feet,” he said.

Needless to say, it’s not light reading. Hawking used the expansion of the universe to challenge an existing gravitational theory (there’s no way galaxies could form as a result of early perturbations, he argued) and provide a model of gravitational radiation and expansion that shows space-time singularities are “inevitable.”

Whether or not you take a look, there was plenty of pent-up demand. Cambridge University said the paper was the “most-requested” work for its open repository, receiving “hundreds” of requests. It’ll also help open the floodgates. All Cambridge graduates will have to offer digital copies of their theses from now on, and they’re being encouraged to make them public. Hawking’s move might give them the confidence boost they need — they’ll know there’s nothing to fear by disclosing their work.

Anyone in the world can now download and read the doctoral thesis of a 24-year-old Cambridge postgraduate student, written in 1966; how many will fully understand Properties of Expanding Universes is another matter.

Stephen Hawking hopes that giving free access to his early work will inspire others, not just to think and learn but to share research. He said: “By making my PhD thesis open access, I hope to inspire people around the world to look up at the stars and not down at their feet; to wonder about our place in the universe and to try and make sense of the cosmos. 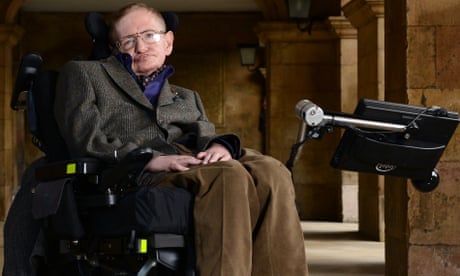 Stephen Hawking: I fear I may not be welcome in Donald Trump’s US

“Anyone, anywhere in the world should have free, unhindered access to not just my research, but to the research of every great and inquiring mind across the spectrum of human understanding.”

Cambridge University, which calls the thesis “historic and compelling”, says it is already the most-requested item in its open access repository, Apollo. “In just the past few months, the university has received hundreds of requests from readers wishing to download Prof Hawking’s thesis in full.”

The work considers implications and consequences of the expansion of the universe, and its conclusions include that galaxies cannot be formed through the growth of perturbations that were initially small.

The thesis is now freely available to all, to mark Open Access Week 2017. Hawking said: “Each generation stands on the shoulders of those who have gone before them, just as I did as a young PhD student in Cambridge, inspired by the work of Isaac Newton, James Clerk Maxwell and Albert Einstein. It’s wonderful to hear how many people have already shown an interest in downloading my thesis – hopefully they won’t be disappointed now that they finally have access to it.”

Hawking’s thesis, with a typed dedication to his supervisor, and a handwritten “this dissertation is my original work – SW Hawking”, set him on the path to becoming one of the most famous scientists in the world. He remains a commanding figure decades after a form of motor neurone disease – diagnosed soon after his 21st birthday – left him confined to a wheelchair and dependent on a computerised voice system for speech.

His 1988 A Brief History of Timebecame one of the most successful popular science books ever published, with more than 10m copies sold worldwide in more than 40 languages.

At Oxford he studied physics though his father wanted him to take medicine, because his own original choice of mathematics wasn’t available. According to his website, “after three years and not very much work” he was awarded a first-class honours degree – he now holds 12 honorary degrees – and then moved to Cambridge to undertake research in cosmology. From 1979 to 2009 he was the Lucasian professor of mathematics at the university – a post once held by Isaac Newton – and he retains an office in the department.

The university hopes that Hawking’s thesis may encourage other scholars to make their work freely available online. From this October all PhD graduates will be required to deposit a digital copy of their theses, and will be urged to make them open access. Cambridge will also be trying to persuade all its former academics, who include 98 Nobel prize winners, to follow Hawking’s example.

The university library has 8m books and periodicals, and a million maps, on 125 miles of shelving expanding by two miles every year.

The treasures in the Apollo archive, which together have been downloaded a million times from all over the world in 2017, include 15,000 research articles, 10,000 images and 2,400 theses. However, the university says it is often a struggle to give free access to historic theses.

Arthur Smith, deputy head of scholarly communication, said more open-access research could lead to major breakthroughs. He said: “By eliminating the barriers between people and knowledge we can realise new breakthroughs in all areas of science, medicine and technology.

“It is especially important for disseminating the knowledge acquired during doctoral research studies. PhD theses contain a vast trove of untapped and unique information just waiting to be used, but which is often locked away from view and scrutiny.”

Hawking, whose original medical diagnosis more than half a century ago gave him two years to live, continues to work and and lecture internationally. Richard Branson has offered him a free place on his Virgin Galactic spacecraft, and his website says “he still hopes to make it into space one day”.

Jon has been hooked on tech ever since he tried a Compaq PC clone when he was five. He’s big on mobile and is one of those precious few people who wears his smartwatch with pride. He’s also an unapologetic Canadian: Don’t be surprised if you get an earful about poutine or the headaches with Canadian carriers.

Maev Kennedy is a special writer for the Guardian