‘Almost everyone’ in a photo of Southwest’s emergency landing wore their oxygen masks ‘wrong,’ says a former flight attendant 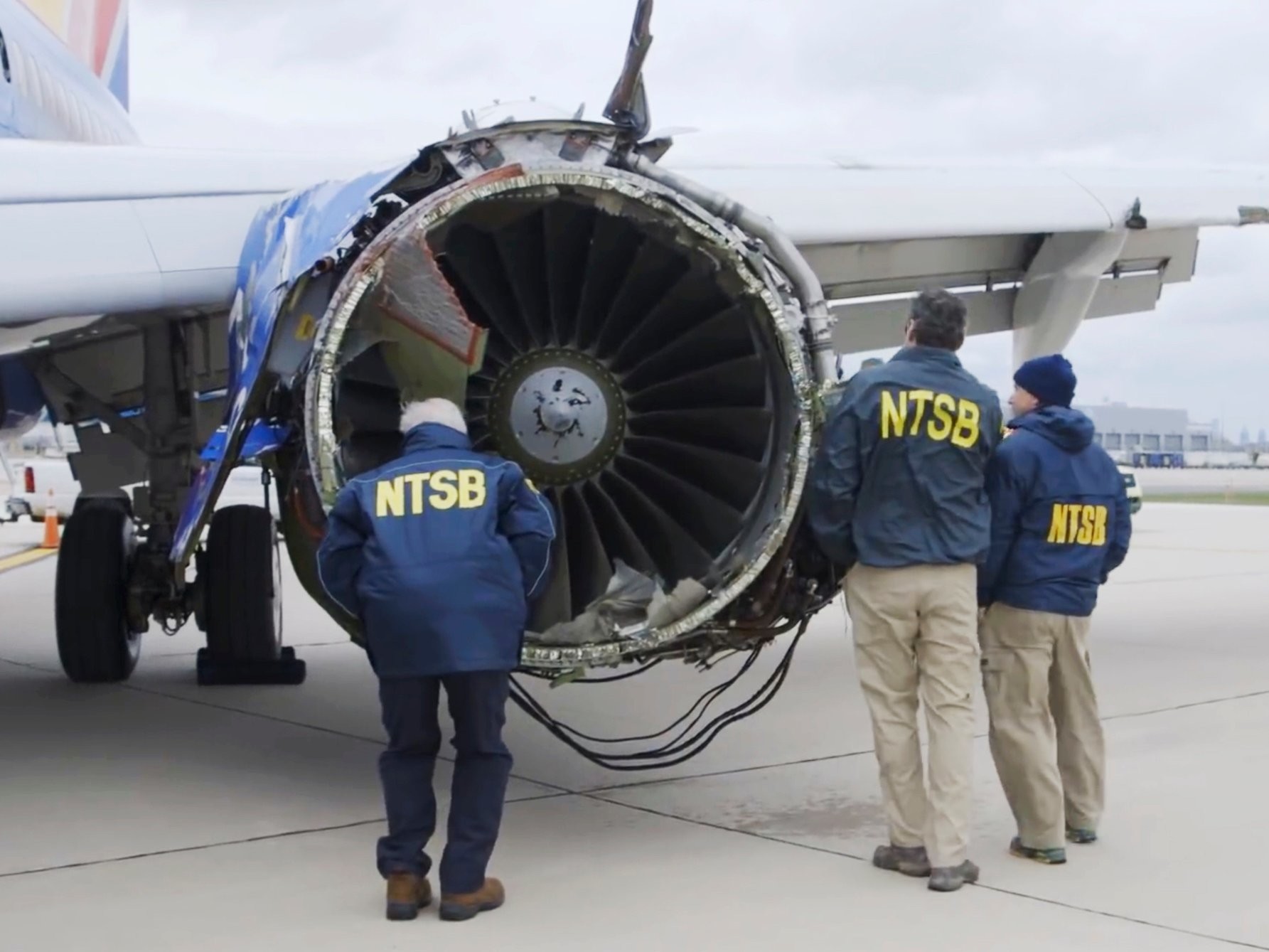 NTSB/AP National Transportation Safety Board officials inspect the damage to an engine of Southwest Airlines Flight 1380.

Shrapnel reportedly pierced the airplane’s fuselage, blew out a window, and caused the cabin of the airplane to depressurize. The incident left one passenger dead. Tammie Jo Shults, the pilot of the flight (who used to fly US Navy fighter jets), guided the Dallas-bound airplane to a safe landing in Philadelphia.

Oxygen masks dropped from the cabin ceiling during the incident, according to a public Facebook postshared by Marty Martinez, a passenger on the flight. 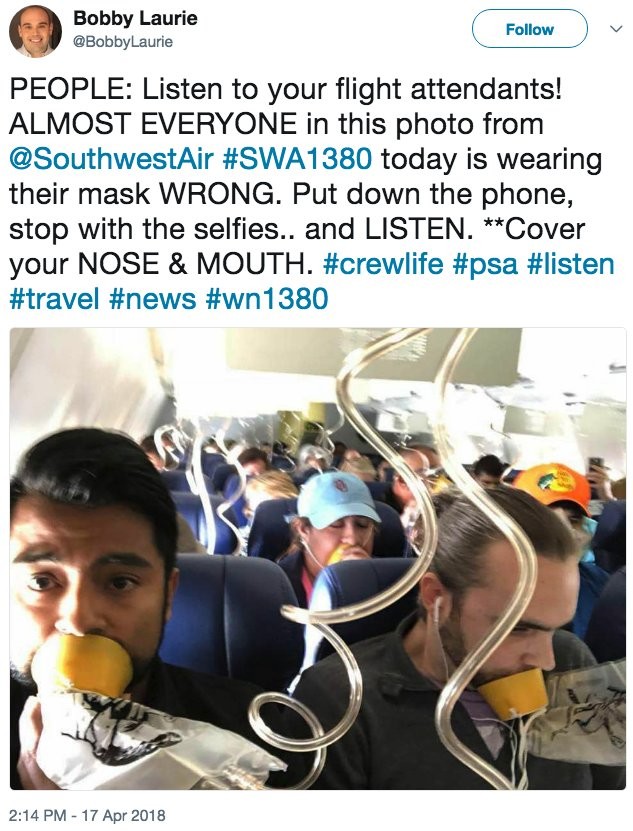 Bobby Laurie, a former flight attendant and TV show host, shared one of Martinez’s photos on Twitteralong with a public service announcement reminding people to cover both their noses and mouths with oxygen masks during an emergency.

“PEOPLE: Listen to your flight attendants!” Laurie said. “ALMOST EVERYONE in this photo from @SouthwestAir #SWA1380 today is wearing their mask WRONG.”

Why you need oxygen if an aircraft cabin loses pressure

Flying at high altitudes with a hole in an airplane is, to put it lightly, dangerous. At altitudes above 15,000 feet, people struggle to breathe and keep enough oxygen in their blood. They can lose consciousness within minutes – a condition called hypoxia.

The percentage of oxygen in the air at high altitudes isn’t the issue, since that stays relatively constant at about 21% until about 70,000 feet. The problem is the lack of air pressure. 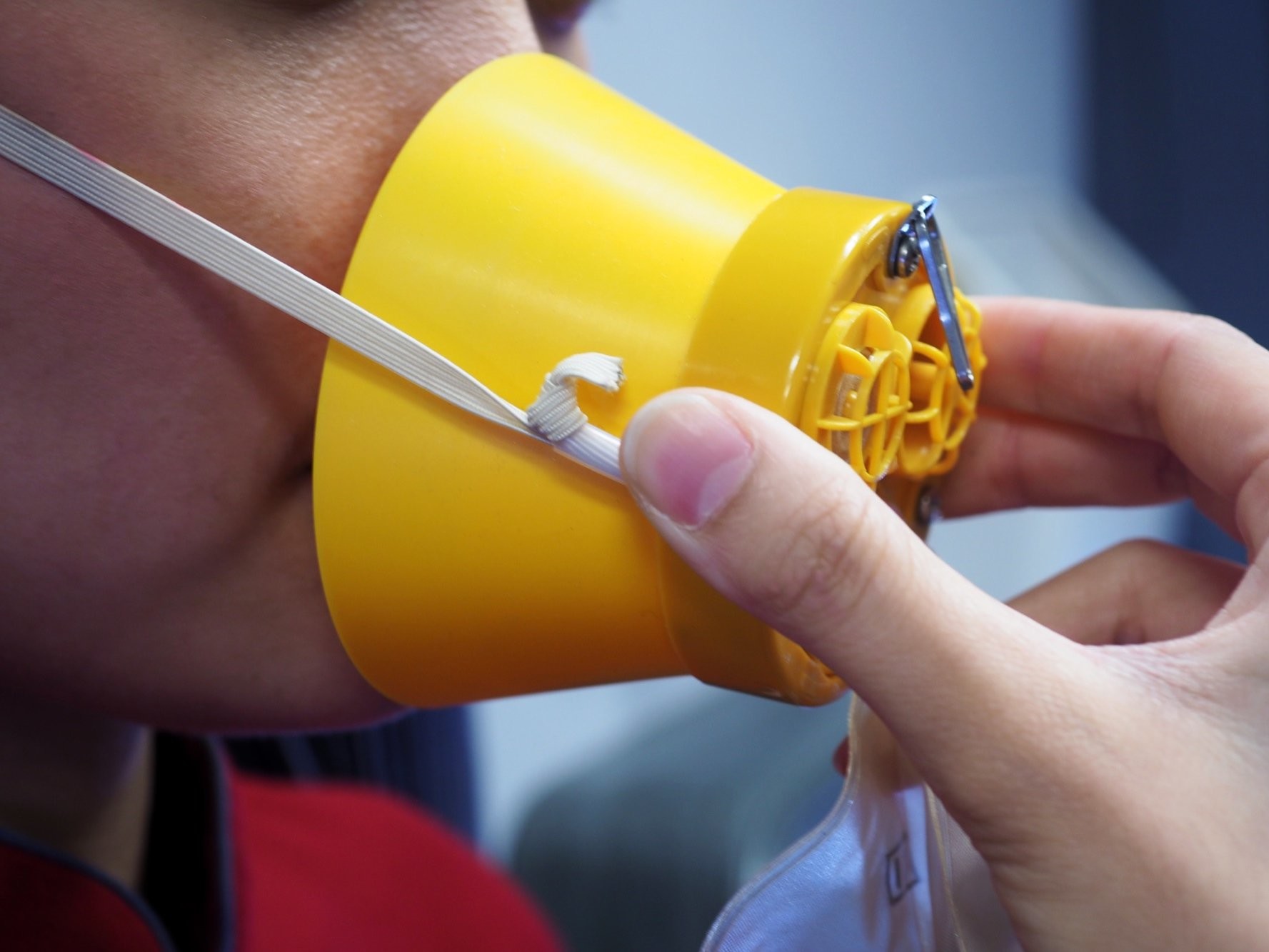 Shutterstock The correct way to wear an oxygen mask during an in-flight emergency.

Adding a flow of 100% oxygen helps counter this physiological problem. But you have to wear and use an oxygen correctly.

If you don’t cover both your nose and mouth with the mask, not enough oxygen may get into your bloodstream, putting you at risk of losing consciousness.

The Southwest flight’s engine failure happened when the plane was around 31,000 feet in the air, based on passenger reports.

Shults descended the crippled airplane to an altitude of 10,000 feet within minutes, according to flight-tracking data provided by FlightRadar24.com, and landed the aircraft about 12 minutes after an emergency was declared.

According to an AOPA chart on “time of useful consciousness” (below), SWA1380 passengers had about 30 seconds to get their masks on after the window blew open: 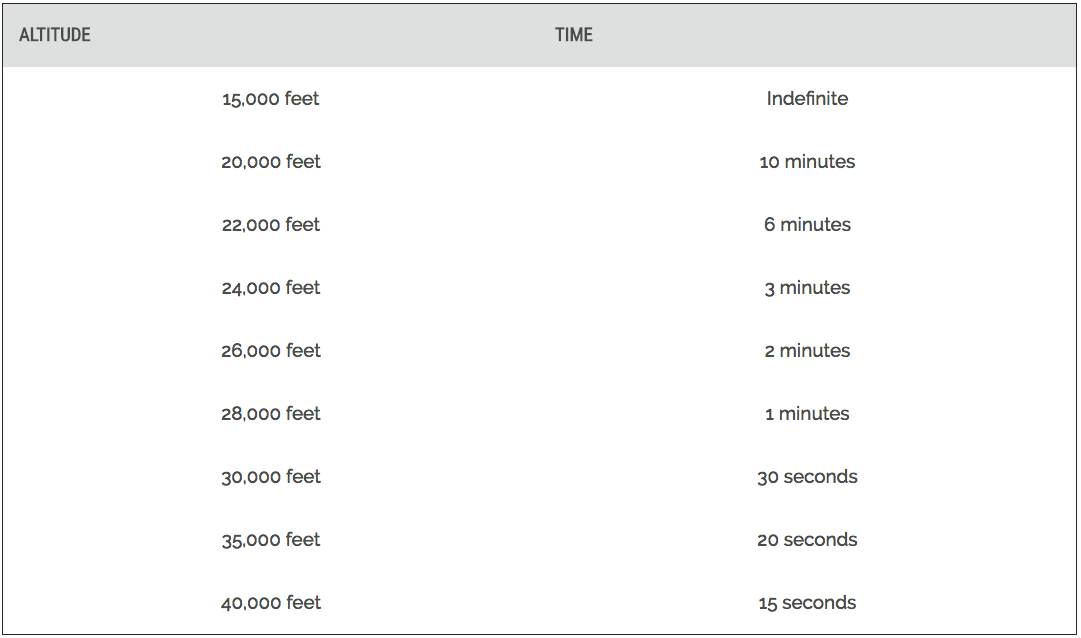 That flow of oxygen is crucial in emergencies, since a plane full of passed-out passengers won’t evacuate itself . And if there’s any kind of fire or smoke condition, an unconscious neighbor slumped in an aisle could mean the difference between life and death. That’s why masks are designed to deploy immediately.

According to Quizlet.com, Southwest passengers get the following instructions before every flight takes off :

“If needed, four oxygen masks will drop from the compartment overhead. To activate the flow of oxygen, pull down on the mask until the plastic tubing is fully extended. Place the mask over your nose and mouth and breathe normally.

“Secure the mask with the elastic strap. Although oxygen will be flowing, the plastic bag may not inflate. Continue wearing the mask until otherwise notified by a Crew member. If you are traveling with children or anyone needing special assistance, put on your mask first.”

Southwest Airlines did not immediately respond to Business Insider’s questions about the use of oxygen masks on SWA1380.

An investigation into the incident is underway.

Although a fear of flying and concerns about airplane safety permeate popular culture, it’s many times safer to travel by airplane than in a car. In fact, SWA1380 is the first fatal US flight in over nine years. Almost 100 million US flights carrying billions of people flew during that time without a death, according to Bloomberg.

The victim was Jennifer Riordan, a New Mexico resident and mother of two, who served as vice president for community relations at Wells Fargo in Albuquerque, according to her LinkedIn profile. She managed employee volunteer service to nonprofit groups.

Dave Mosher is a science and technology correspondent at Business Insider with more than a decade of digital, print, video, and photojournalism experience.

He reports fascinating and important stories in space, physics, engineering, nuclear weapons/energy, medicine, biology, and the potential destruction or salvation of humanity.

Over the years he’s watched humans, robots, and a car rocket into space, toured crumbling and cutting-edge nuclear facilities, chased a total solar eclipse over the North Pole, and donated his feces to researchers, among other reporting adventures.

Confidential tips, leads, and leaks are welcome; Dave takes extensive steps to protect his most sensitive sources, and he reports stories as fairly, completely, accurately, and conversationally as possible. Use the tools below to contact him privately and securely, but do not use an employer’s email, internet, or other systems to do so:

(Add this number to your contacts, message it via the Signal app, then delete the number from your contacts. Encrypted communication will show a 🔒 symbol.)

•  SecureDrop:  doaxi7t7lkctvq5i.onion (Use the  Tor browserto load this URL and securely share files and messages.)

When Dave joined Business Insider in April 2015, he helped launch and run Tech Insider as its deputy editor of science coverage. Mosher previously served as the online director of Popular Science, was a Wired contributor, and has written for Scientific American, Popular Mechanics, Discover, Space.com, National Geographic News, Discovery.com, and other outlets.

He holds degrees in journalism and biology from the Ohio State University.

Disclosure: Dave Mosher is married to a communications employee at the American Museum of Natural History. He regularly contributes to Health News Review.

Disclosure: Smita Nair Jain has nothing to disclose. She doesn’t own stock in any publicly traded companies and does not hold investments in the technology companies. She has equivalent of the American 401(k) plan in India that is automatically managed. (Updated: April 20, 2018)