The US just grabbed back the crown from China with the AI-focused Summit. 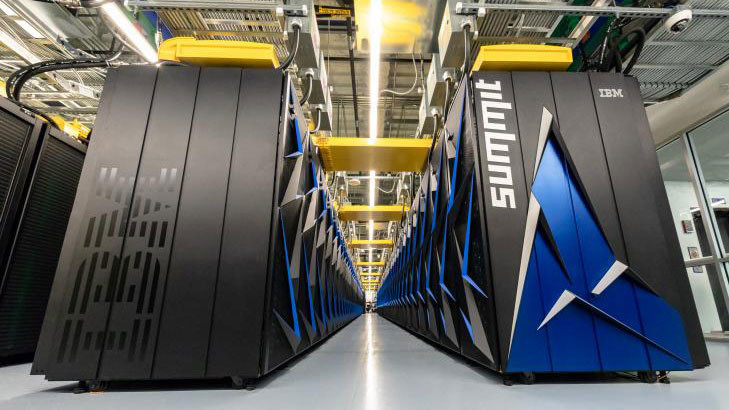 The Department of Energy pulled back the curtain on the world’s most powerful supercomputer Friday. When Summit is operating at max capacity, it can run at 200 petaflops — that’s 200 quadrillion calculations per second. That smokes the previous record holder, China’s Sunway TaihuLight (which has a 93 petaflop capacity). Summit is also about seven times faster than Titan, the previous US record holder which is housed at the same Oak Ridge National Lab in Tennessee. For perspective, in one hour, Summit can solve a problem that it would take a desktop computer 30 years to crack.

There’s a lot more to Summit than simply snatching back a record China’s held for five years. It was designed for artificial intelligence operations, and can use machine learning and deep learning to power research into health, physics and climate modeling, among other domains. 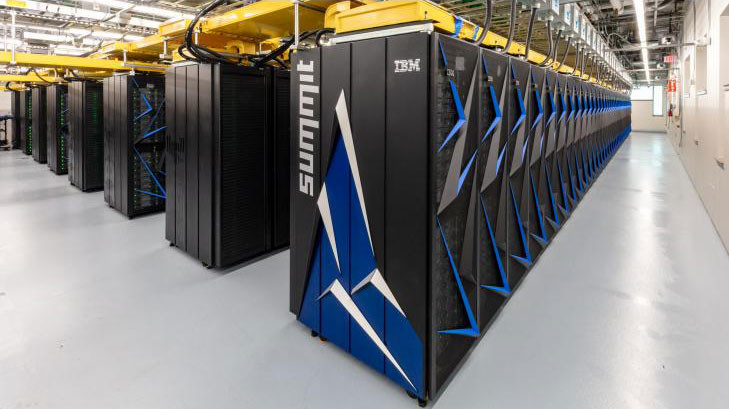 Scientists have already used Summit to run what they say is the first exascale scientific calculation. That’s one billion billion calculations per second (or one exaop). Summit almost doubled that, as it ran at 1.88 exaops to analyze millions of genomes; the supercomputer can hit 3.3 exaops using mixed precision calculations. The US is aiming to build a fully capable exascale computing ecosystem for research by 2021, and Summit is a step towards that.

Upcoming projects include analyzing exploding stars (or supernovas) to find out how elements like gold moved through the universe, and running simulations on new types of materials such as superconductors. Scientists also plan to look for relationships between cancer factors like genes, biological markers and environment by crunching vast reams of health data. Researchers will use Summit’s power to probe other disease markers, such as for Alzheimer’s, heart disease and addiction. “Summit is enabling a whole new range of science that was simply not possible before it arrived,” Oak Ridge computational biologist Dan Jacobson said in a release.

There’s a battle between not only the US and China, but Europe, Japan and other nations to build better supercomputers. The machines aren’t just focused on health and environmental research; supercomputers are used for aircraft design and developing nuclear weapons too, so there’s a lot at stake.

With a peak performance of 200,000 trillion calculations per second—or 200 petaflops, Summit will be eight times more powerful than ORNL’s previous top-ranked system, Titan. For certain scientific applications, Summit will also be capable of more than three billion billion mixed precision calculations per second, or 3.3 exaops. Summit will provide unprecedented computing power for research in energy, advanced materials and artificial intelligence (AI), among other domains, enabling scientific discoveries that were previously impractical or impossible.

“Today’s launch of the Summit supercomputer demonstrates the strength of American leadership in scientific innovation and technology development. It’s going to have a profound impact in energy research, scientific discovery, economic competitiveness and national security,” said Secretary of Energy Rick Perry. “I am truly excited by the potential of Summit, as it moves the nation one step closer to the goal of delivering an exascale supercomputing system by 2021. Summit will empower scientists to address a wide range of new challenges, accelerate discovery, spur innovation and above all, benefit the American people.”

ORNL researchers have figured out how to harness the power and intelligence of Summit’s state-of-art architecture to successfully run the world’s first exascale scientific calculation. A team of scientists led by ORNL’s Dan Jacobson and Wayne Joubert has leveraged the intelligence of the machine to run a 1.88 exaops comparative genomics calculation relevant to research in bioenergy and human health. The mixed precision exaops calculation produced identical results to more time-consuming 64-bit calculations previously run on Titan.

In addition to scientific modeling and simulation, Summit offers unparalleled opportunities for the integration of AI and scientific discovery, enabling researchers to apply techniques like machine learning and deep learning to problems in human health, high-energy physics, materials discovery and other areas. Summit allows DOE and ORNL to respond to the White House Artificial Intelligence for America initiative.

“Summit takes accelerated computing to the next level, with more computing power, more memory, an enormous high-performance file system and fast data paths to tie it all together. That means researchers will be able to get more accurate results faster,” said Jeff Nichols, ORNL associate laboratory director for computing and computational sciences. “Summit’s AI-optimized hardware also gives researchers an incredible platform for analyzing massive datasets and creating intelligent software to accelerate the pace of discovery.”

Summit moves the nation one step closer to the goal of developing and delivering a fully capable exascale computing ecosystem for broad scientific use by 2021.

Summit will be open to select projects this year while ORNL and IBM work through the acceptance process for the machine. In 2019, the bulk of access to the IBM system will go to research teams selected through DOE’s Innovative and Novel Computational Impact on Theory and Experiment, or INCITE, program.

In anticipation of Summit’s launch, researchers have been preparing applications for its next-generation architecture, with many ready to make effective use of the system on day one. Among the early science projects slated to run on Summit:

Exploding stars, known as supernovas, supply researchers with clues related to how heavy elements—including the gold in jewelry and iron in blood—seeded the universe.

The highly scalable FLASH code models this process at multiple scales—from the nuclear level to the large-scale hydrodynamics of a star’s final moments. On Summit, FLASH will go much further than previously possible, simulating supernova scenarios several thousand times longer and tracking about 12 times more elements than past projects.

“It’s at least a hundred times more computation than we’ve been able to do on earlier machines,” said ORNL computational astrophysicist Bronson Messer. “The sheer size of Summit will allow us to make very high-resolution models.”

Developing the next generation of materials, including compounds for energy storage, conversion and production, depends on subatomic understanding of material behavior. QMCPACK, a quantum Monte Carlo application, simulates these interactions using first-principles calculations.

Up to now, researchers have only been able to simulate tens of atoms because of QMCPACK’s high computational cost. Summit, however, can support materials composed of hundreds of atoms, a jump that aids the search for a more practical superconductor—a material that can transmit electricity with no energy loss.

“Summit’s large, on-node memory is very important for increasing the range of complexity in materials and physical phenomena,” said ORNL staff scientist Paul Kent. “Additionally, the much more powerful nodes are really going to help us extend the range of our simulations.”

One of the keys to combating cancer is developing tools that can automatically extract, analyze and sort existing health data to reveal previously hidden relationships between disease factors such as genes, biological markers and environment. Paired with unstructured data such as text-based reports and medical images, machine learning algorithms scaled on Summit will help supply medical researchers with a comprehensive view of the U.S. cancer population at a level of detail typically obtained only for clinical trial patients.

This cancer surveillance project is part of the CANcer Distributed Learning Environment, or CANDLE, a joint initiative between DOE and the National Cancer Institute.

“Essentially, we are training computers to read documents and abstract information using large volumes of data,” ORNL researcher Gina Tourassi said. “Summit enables us to explore much more complex models in a time efficient way so we can identify the ones that are most effective.”

Applying machine learning and AI to genetic and biomedical datasets offers the potential to accelerate understanding of human health and disease outcomes.

Using a mix of AI techniques on Summit, researchers will be able to identify patterns in the function, cooperation and evolution of human proteins and cellular systems. These patterns can collectively give rise to clinical phenotypes, observable traits of diseases such as Alzheimer’s, heart disease or addiction, and inform the drug discovery process.

Through a strategic partnership project between ORNL and the U.S. Department of Veterans Affairs, researchers are combining clinical and genomic data with machine learning and Summit’s advanced architecture to understand the genetic factors that contribute to conditions such as opioid addiction.

“The complexity of humans as a biological system is incredible,” said ORNL computational biologist Dan Jacobson. “Summit is enabling a whole new range of science that was simply not possible before it arrived.”

Summit is part of the Oak Ridge Leadership Computing Facility, a DOE Office of Science User Facility located at ORNL. UT-Battelle manages ORNL for the Department of Energy’s Office of Science, the single largest supporter of basic research in the physical sciences in the United States. DOE’s Office of Science is working to address some of the most pressing challenges of our time. For more information, please visit http://science.energy.gov.

Photos, b-roll and additional resources are available at http://olcf.ornl.gov/summit.

Videos of Summit available at https://www.dropbox.com/sh/fy76ppz7cvjblia/AAC0m93xBWk4poM-rRwJbiZza?dl=0.

Disclosure: Smita Nair Jain has nothing to disclose. She doesn’t own stock in any publicly traded companies and does not hold investments in the technology companies. She has equivalent of the American 401(k) plan in India that is automatically managed. (Updated: June 12, 2018)